3D
9,210 views 436 downloads
2 collections
Community Prints Add your picture
Be the first to share a picture of this printed object
0 comments

Tom Clancy's Splinter Cell is a stealth video game, developed by Ubisoft Montreal and built on the Unreal Engine 2. It is the first Splinter Cell game in the series. Endorsed (but not created) by author Tom Clancy, it follows the activities of NSA Black Ops agent Sam Fisher

I started modelling the sonar goggles in a wearable size. I've been using 3d studio max for the base mesh.

I started modelling a human bust for Sam Fisher in Zbrush with Zsphere, I used Zremesher and project all to keep the high

details on the model. After this I went through the mask tool to make the parts of his suit and extracted the parts I masked after that used edge loops

for the parts to have a more clean look to it. The final step is to export the obj file of the night vision from 3ds max and imported it to zbrush

these. I merged  all the  subtools, I dynameshed and finally I used decimation master to decrease the polygon count. 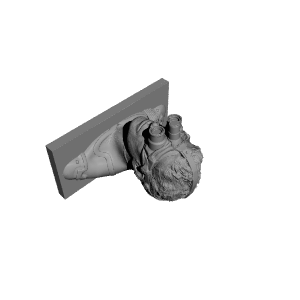