3D
Scan The World
5,200 views 356 downloads
4 collections
Community Prints Add your picture
Be the first to share a picture of this printed object
0 comments

Samson is seen here wielding the jawbone of an ass in order to slay one of the Philistines who have taunted him. This is the earliest of the great marble groups by Giovanni Bologna (called Giambologna), and the only substantial work by the artist to have left Italy. Commissioned by Francesco de’Medici, it was subsequently set up on a fountain in Florence. In 1601 the fountain was sent to Spain as a gift to the Duke of Lerma, chief minister of Philip III of Spain, from the Grand-Duke Ferdinando I of Tuscany. The group was later presented to Charles Prince of Wales on his visit to Spain in 1623. On its arrival in England, it was given to the king’s favourite, the Duke of Buckingham, and subsequently changed hands three times before coming to the Museum in 1954.

This sculpture is a good example of the multiple viewpoints seen in Giambologna’s work; the spiralling movement of the bodies means that there is no single viewpoint. This contrasts with the work of the slightly later sculpture of Bernini, whose monumental works almost invariably have only one viewpoint. Despite the fact that the marble is weathered from three centuries outdoors, Giambologna’s sensitive carving is still apparent. 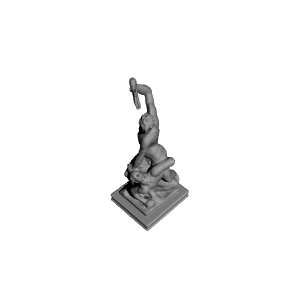