3D
Scan The World
2,013 views 207 downloads
1 collection
Community Prints Add your picture
Be the first to share a picture of this printed object
0 comments

Saint John of Nepomuk (or John Nepomucene) (c. 1345 – March 20, 1393) is the saint of Bohemia (Czech Republic), who was drowned in the Vltava river at the behest of Wenceslaus, King of the Romans and King of Bohemia. Later accounts state that he was the confessor of the queen of Bohemia and refused to divulge the secrets of the confessional. On the basis of this account, John of Nepomuk is considered the first martyr of the Seal of the Confessional, a patron against calumnies and, because of the manner of his death, a protector from floods and drowning. 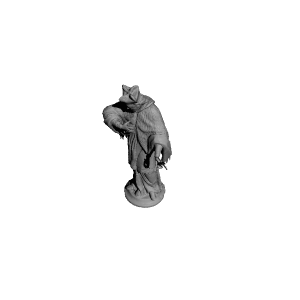