3D
Scan The World
7,761 views 1,094 downloads
5 collections
Community Prints Add your picture
Be the first to share a picture of this printed object
0 comments

This miniature temple is composed of three sections. It is typical of the later north Indian or nagara style of Indian temple architecture. Raised on a moulded basement, the main shrine of a Hindu temple consists of a small, square chamber with a single entrance. Inside is an image of the temple's deity, in this case a linga, the symbolic, phallic emblem of <href="ilink|,_blank|">Shiva. Above the doorway is a small image of Ganesha, the remover of obstacles, who often appears at the entrance to temples. Above the main shrine rises theshikhara or tower of the temple. The basic form of the tower is repeated in miniature at the centre of each side and at the diagonals in the typical north Indian manner. The tower is designed to represent the sacred Mt. Meru, the cosmic mountain at the centre of the Hindu universe.

Groups of small shrines like this are frequently placed by rivers or other sacred places. They represent donations by pious individuals, the small size indicating the donor's relatively modest means. This shrine was probably bought new by a European at Benares (Varanasi), the sacred Hindu city on the River Ganga. It was never consecrated. It was in the museum of the East India Company by the 1850s and transferred to The British Museum in 1880. 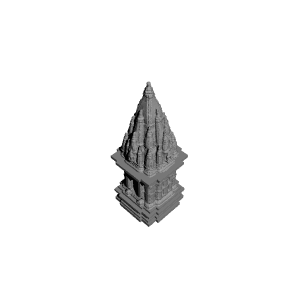 ×
5 collections where you can find Sandstone Hindu Temple at The British Museum, London by Scan The World