This object was made in Tinkercad. https://www.tinkercad.com/things/3H9dBCj2vxf

Santa's new sleigh was designed for the My Mini Factory Christmas Holiday Challenge. I designed it so that it looks a bit like a sleigh, but has enough space for all the presents as well as the latest technology. Also it has a very important feature: it can fly, and personally I find that this is what makes Santa's sleigh so special. That it can just fly through the sky. To achieve this, I added some wings, as well as a tail rudder. The skids of the sleigh are the thrusters and act as floats, so that Santa can access every part of the world. I have given Santa a nice comfy seat into which a radiator is built, so that Santa has a warm night. As well as having a nice warm seat he also has a small table, on which he can put documents etc. If Santa is hungry, he just has to look into his small cupboard to find the food he likes. To access the internet, I added a small practical router as well as making the nose aerodynamic, by taking the dolphin as a biological example. The sleigh is controlled via a steering wheel and a few pedals and it has a small hatch on its belly, so that the presents can float through the chimneys into the homes of their new owners. The headlights are there so that Santa doesn't need Rudolph on a foggy Christmas Eve. To see critical information such as the amount of fuel in the fuel tank he just has to look at his dashboard. I chose the colours so that they represent a "traditional" image of Santa. Finally, I added the writing, so that if anybody sees Santa's sleigh, they see a nice Christmas message. 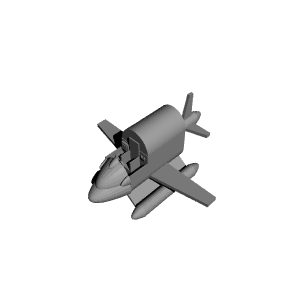 ×
0 collections where you can find Santa's new sleigh by 15thoegen