Merymose was the viceroy of Kush (Upper Nubia) in the reign of Amenhotep III (about 1390-1352 BC). Kush and Nubia were important sources of wealth for the ancient Egyptians, and during the New Kingdom (about 1550-1070 BC) produced much of the gold which the regime required.

The sarcophagi came from Tomb no. 383 in the hill of Qurnet Marai, in the southern part of the necropolis (cemetery). The tomb was discovered in 1940. Parts of the two other sarcophagi are also in the British Museum, with other fragments in the Musée du Louvre, Paris, and in the USA. Substantial parts also remain in Luxor. 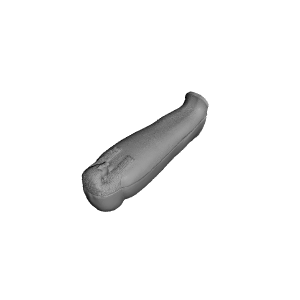 ×
4 collections where you can find Sarcophagus of Merymose at The British Museum, London by Scan The World
×
MiméticasLab
@mimeticaslab
1
Printed on: Prusa i3 MK3
Material: PLA
Posted at: 12th November 2018