3D
360°
Scan The World
1,477 views 74 downloads
1 collection
Community Prints Add your picture
Be the first to share a picture of this printed object
0 comments

This marble sarcophagus is dedicated to the Saints Sergius and Bacchus, it was made in 1179 by a master sculptor of that time.

Saints Sergius (or Serge) and Bacchus were fourth-century Roman Christian soldiers revered as martyrs and military saints by the Catholic, Eastern Orthodox and Oriental Orthodox Churches. Their feast day is 7 October.

According to their hagiography, Sergius and Bacchus were officers in Galerius' army, and were held high in his favor until they were exposed as secret Christians. They were then severely punished, with Bacchus dying during torture, and Sergius eventually beheaded. However, due to its historical anachronisms, the hagiography is considered ahistorical.

Sergius and Bacchus were very popular throughout Late Antiquity, and churches in their honor were built in several cities, including Constantinople and Rome. The close friendship between the two is strongly emphasized in their hagiographies and traditions, making them one of the most famous examples of paired saints. This closeness led the historian John Boswell to suggest that their relationship was a romantic one; though other historians have widely rejected this theory, it has led to popular veneration of Sergius and Bacchus in the gay Christian community. 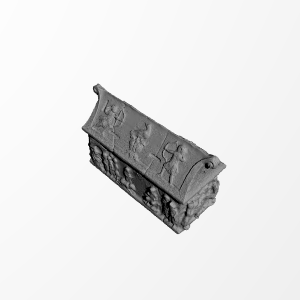