Sarcophagus of the Battles Between the Greeks

3D
Scan The World
2,275 views 115 downloads
Community Prints Add your picture
Be the first to share a picture of this printed object
0 comments

Sarcophagus of the Battles Between the Greeks

From the second century AD, Athenian workshops competed with those of Rome in the production of monumental sarcophagi, which were often exported to other parts of Greece or across the Mediterranean. One such example is this sarcophagus, made circa AD 180 and found in Thessaloniki. The roughly hewn lid represents the deceased couple on their funeral bed. The box portrays the legendary battle between the Greeks and the Amazons; the back is adorned with garlands and griffons.

This monumental sarcophagus was discovered in 1836 in the northern Greek city of Thessaloniki. It entered the Louvre in 1884, two years after the consul M. Gillet had given it to Louis-Philippe. Despite its provenance, the box is an Attic creation from the second century AD. Athens was the third largest center for the production of sarcophagi after Rome and Asia Minor; its sculptural tradition was perpetuated by relief-decorated sarcophagi, often destined for a foreign clientele and exported across the Mediterranean or within Greece itself (as in the present case). Production ceased during the late third century under the impact of the economic crisis, which was partly due to the Herulian invasion of Attica in AD 267.

In accordance with a practice that was also attested in Etruria, Italy, and Rome, the sculptor personalized this sarcophagus by portraying the deceased couple, half-reclining on the lid. The structure of the box resembles that of the funeral bed, supported at the corners by caryatids and terminal figures, with its thick mattress and embroidered cushions. Several indications suggest that these portraits date from circa AD 180: the woman's hairstyle, for example, with large waves on either side of a central parting and a chignon at the nape of the neck, resembles the imperial hairstyle worn by noble Roman women during the late Nervan-Antonian dynasty (AD 96-192). The couple's strongly chiseled features attest to the work of a local sculptor, who added these portraits to an unfinished sarcophagus imported to Northern Greece from Attica.

Attic sarcophagi were placed in edifices that were open to public view and, unlike Roman models (sculpted on three sides only), they were decorated with reliefs on all four sides. In the present case, the choice of theme was inspired by an episode from mythology: the main panel and short sides depict the battle of the Greeks and Amazons during the Trojan War. This episode was marked by the death of Queen Penthesilea in the arms of Achilles, who fell in love with her after delivering her death blow. The dense, violent composition plays on the tangle of figures, with contorted poses and effects of drapery that contrast with the nudity of the bodies. Although modified, the fighters' poses were inspired by traditional Greek sculpture. The monumentality of the figures reflects the Greek artists' taste for decoration resembling sculpture in the round, where the characters are treated like individual sculptures. On the back of the box, two griffons in low relief face each other inside garlands that hang from an eagle and from two terminal figures of Heracles. 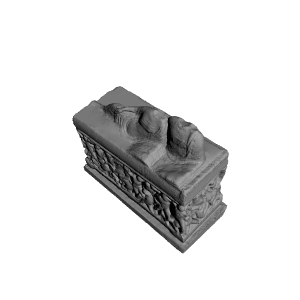