3D
Scan The World
4,168 views 155 downloads
Community Prints Add your picture
Be the first to share a picture of this printed object
0 comments

Made for the burial of a noble Roman, this sarcophagus shows the deceased on the day of his marriage. Such sarcophagi are called biographical, although in fact they were intended not so much to depict concrete events as to sing the praises of the main Roman virtues - piety, military valour and connubial harmony. On the front wall of the sarcophagus, standing either side of an altar are the bride and groom, the face of the latter clearly a portrait. The young couple are being united by the Goddess of Harmony. The groom is crowned by Valour, a winged figure of a woman with a palm branch in her hand. By the bride we see Venus, goddess of love and beauty, with her son, the god of love, Cupid, a winged boy with a quiver. The god of marriage Hymen, holding a torch, concludes the group of heavenly figures. They are surrounded by relatives and friends of the newly-weds. On the lid of the sarcophagus are the three Parcae, goddesses of destiny, and also Jupiter, Juno and Minerva, the three main Roman divinities. The whole group is flanked by the god of the Sun and, to the right, the goddess of the Moon. In this way people, gods and the Universe become witnesses to the irreproachable life of this Roman citizen. In this relief the influence of Greek art is felt in the idealized treatment of faces, but the interest in portraiture, the lack of any free background surface, and a love of details all lie definitely within the Roman artistic tradition.

Although there are some supports, it is easy to clean and there is no risk to brake any part on the model, it is quite solid. Enjoy your print. 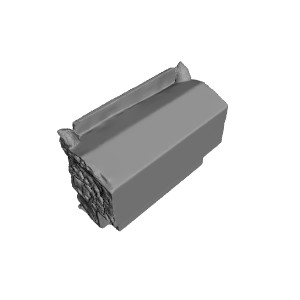 ×
0 collections where you can find Sarcophagus panel depicting a matrimonal ceremony at The State Hermitage Museum, St Petersburg by Scan The World