Sarcophagus Relief with Orestes and Iphigenia

3D
Scan The World
1,958 views 88 downloads
Community Prints Add your picture
Be the first to share a picture of this printed object
0 comments

Sarcophagus Relief with Orestes and Iphigenia

This relief shows scenes from the story of Iphigenia in Taurus, a tragedy by Euripedes. Iphigenia is the daughter of Agamemnon, and was meant to be sacrificed to appease Artemis. The goddess saved her at the last minute and took her to be a priestess in her temple in King Thoas's kingdom of Taurus. Iphigenia is given the task of ritually sacraficing any foreigners who land there. Eventually, her brother Orestes (and his friend Pylades) gets to Taurus, to perform an act of penance for killing their mother to avenge their father. Iphigenia doesn't recognise them at first, but then she realises and comes up with a plan to escape with them. 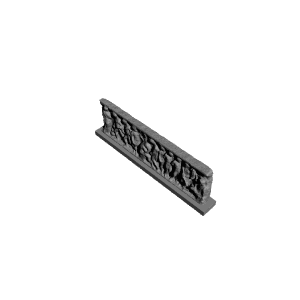