3D
360°
Scan The World
1,836 views 90 downloads
Community Prints Add your picture
Be the first to share a picture of this printed object
0 comments

The sarcophagus depicts the battle between Greeks and Amazons during the Trojan War. The episode of Achilles and Penthesilea occupies the centre of the scene: the hero after having hit to death the queen of the Amazons falls in love with her at first sight just when she dies. Here Achilles supports the slumped body of the queen, and around them, that appear indifferent to the events of the battle, the fight rages: Greeks and Amazons clash with their swords and axes. Many fighters and horses lie on the ground. The sizes of Achilles and Penthesilea relative to the background figures are increased to draw attention to them, and they appear surrounded by smaller, densely interwoven figures and similarly are clustered together, and there are figures not in full view and situated behind other figures. The confusion of the battle leaves the viewer with a disoriented feeling perhaps similar to being present within an actual battle.

The mutual love between a couple is the central message of this sarcophagus. Achilles and Penthesilea are here depicted in the guise of the deceased spouses, and both the protagonists receive portrait features. According to the rendering of their portraits and hairstyle this sarcophagus dates back to the half of the III century AD.

The group of Achilles and Penthesilea sarcophagi emerges around the start of the third century from a group of battle sarcophagi showing the Amazonomachy. While both husband and wife were celebrated in these sarcophagi, the type seems to stress the love and virtue of the man rather than that of the woman. Through his assimilation to the martial hero Achilles, he is shown as a warrior, while his love and support for his wife are expressed through his embrace of her slumped body. What it meant for a wife to be likened to Penthesilea is less clear; perhaps it is primarily the fact of her death which is important here rather than any specific virtues which she is seen to embody.

The Achilles and Penthesilea sarcophagi offer two sorts of messages. Like the chests celebrating Endymion and Selene and Mars and Rhea Silvia they use portrait heads to allude to the happy union between husband and wife. At the same time the presentation of this couple on a battlefield also stresses the martial vigor of the man. 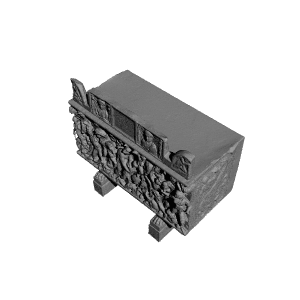