Sarcophagus with the myth of Phoedra

3D
Scan The World
2,307 views 101 downloads
Community Prints Add your picture
Be the first to share a picture of this printed object
0 comments

Sarcophagus with the myth of Phoedra

This relief decorated the front of a large marble sarcophagus, of which only the left corner is preserved. The scene depicts a group of veiled women turning toward the right, accompagnied by a girl who looks toward the left. In the lower part of the sarcophagus, to the right of the girl, is a statuette of Priapus, the Roman god of virility. The identification with the myth of Phoedra is based on the comparison with other sarcophagi representing the same scene, where a group of women, the handmaidens of Phoedra, whose image has been lost in this sarcophagus, is trying to console their mistress, who is in love with her stepson, Hippolytus- an unrequited love. Another element that recalls the story of Phoedra is the little temple in the upper left, interpreted as a temple of Artemis/ Diana, goddess of the hunt, to who Hippolytus was devoted. Phoedra's unrequited longing for Hippolytus and the tragic death of the boy are quite commonly depicted on Roman sarcophagi, for the love-pains of Phaedra came to symbolize in the funerary context the grief for the loss of a beloved one. On the basis of the hair styles and the extensive use of the drill, the work has been dated between the end of the 2nd and the beginning of the 3rd century A.D. 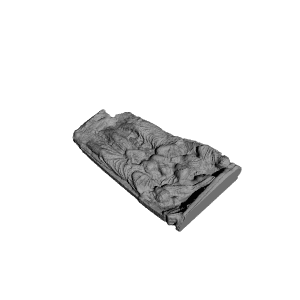