Scarab at The British Museum, London

Scarab at The British Museum, London

The scarab beetle, or 'dung' beetle, is one of the enduring symbols of ancient Egypt, representing re-birth and associated with the rising sun. This giant sculpture of a scarab is made from an oval block of green stone called diorite. It is so dark it is almost black: its gleaming surface pitted and scarred. The block measures just over one and a half metres long and about a metre wide, and stands a metre high. The beetle is carved from the top third of the block, as though it is sitting on a plinth.

This sculpture is one of the largest known representations of a scarab. It is thought to be from the Ptolemaic period - from 305-30 BC - but could be earlier. The sculpture may once have stood in an Egyptian temple but it was found in Constantinople - modern Istanbul in Turkey. It might have been taken there after Constantinople became the capital of the Roman Empire in AD 330. The sculpture was bought in the nineteenth century by Lord Elgin. 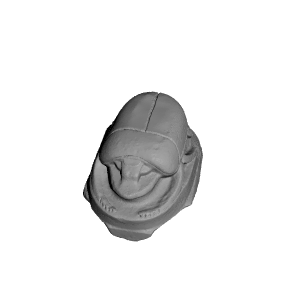 ×
3 collections where you can find Scarab at The British Museum, London by Scan The World
×
paul robinette
@Probin89
2
Printed on: Creality Ender 3
Material: PLA
Posted at: 03rd October 2022