Scent bottle depicting a woman holding a dove at The British Museum, London

3D
Support Free Scan The World
2,435 views 87 downloads
Community Prints Add your picture
Be the first to share a picture of this printed object
0 comments

Scent bottle depicting a woman holding a dove at The British Museum, London

The earliest Greek colonists in southern Italy and Sicily produced terracottas closely related to those of their mother cities in the Greek mainland and the east. In the archaic and classical periods they developed their own regional specialities. Most Hellenistic terracottas reflect the influence of the mainland Greek 'Tanagra' style. All the Greek cities of the west made their own terracottas.

Important production centres included Locri, Taranto, Ruvo and Canosa. The late Hellenistic figures of Canosa are often on a monumental scale. Some must have formed a cheap alternative to statues in bronze or marble while others served as attachments to large, polychrome vases

Islands such as Rhodes or Samos, and the Greek cities on the coast of Asia Minor, also produced terracottas from early times.

In the archaic period, many terracotta figures were made in the form of bottles - containers for perfumed oil. Produced in Rhodes, Samos or Miletus, these were exported throughout the Mediterranean, reaching Italy in the west and the shores of the Black Sea in the north.

The most ambitious terracotta figures of the Hellenistic world were made at Myrina, a small city of no political significance beween Smyrna and Pergamon. Some reflect contemporary trends in large-scale sculpture, and a few bear the names of their makers on the back.

The terracottas of Hellenistic Cyprus reflect the blend of local and cosmopolitan influences characteristic of the island at this time. 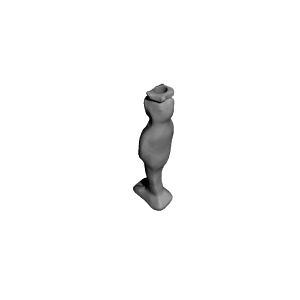 ×
0 collections where you can find Scent bottle depicting a woman holding a dove at The British Museum, London by Scan The World