3D
360°
1,229 views 24 downloads
Community Prints Add your picture
Be the first to share a picture of this printed object
0 comments

These pieces comprise one body of work that Scott F. Hall (BFA in sculpture, 1991, MFA in sculpture, 1994) created from 1989 to 2021. Hall invented this style initially by developing large, entwined spans of figures within drawings up to 3.5 meters wide. The drawn figures were discovered through an automatic process of additive and subtractive mark making which could induce pareidolia. Once noticed in the field, each figure could be elaborated upon to fully bring it into view.

As an undergraduate sculpture major at that early time, Hall soon began to create equivalent 3-D imagery focused on the single clay-modeled figure presented in a particular pose, usually in half-bodied form (depicted from the pelvis upward). Throughout this 32-year-long series, Hall's sculptures show figures in a solitary and bound condition: this refers directly to Existentialism, a focal interest to him in the late '80s during the hay day of Postmodern disillusionment. Though later Hall's philosophical outlook moved well beyond Existentialism and Postmodernism, the stark and quietly tortured look of his figures persisted. Every sculpture in this series and the entire series itself remains untitled, which is appropriately in-sync with the surrogate nature of Hall's figures.

In each case, a Hall sculpture began in white oil-based clay on a rather small scale, the height of each figure ranging about 12 to 20 centimeters. Usually, modeling was done entirely with the fingers. Composition of poses happened only during study phases; these always occurred prior to the actual sculpting of clay. Ultimately, Hall sculpted each figure quickly and from memory. The works he produced exhibit high realism but in an impressionist sense: each viewer is led to cloud read each Hall sculpture for himself.

Following the act of sculpting, each clay figure was turntable-scanned, cleaned of stray pixels, and was converted to STL file. If some artifacts of digital processing persisted (i.e. small areas of faceting), Hall accepted these as markers of process.

Several of Hall's earliest figures were molded in silicone and cast in wax, plaster, or resin. The very first piece in this series exists as a one-of-a-kind lost wax bronze. 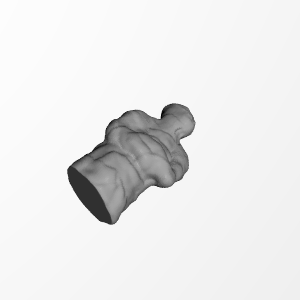