This is my second version of Porg with a screaming pose.

You can find my first version at https://www.myminifactory.com/object/porg-star-wars-the-last-jedi-47553

Porgs were a sea bird species native to the planet Ahch-To, where Jedi Master Luke Skywalker made his exile in the years following the victory over the Galactic Empire. The creatures, who dwelled on the cliffs of the island where Skywalker lived, could build nests and fly. Male porgs were known to be slightly bigger in size than females. Baby porgs were called porglets.

Supports needed for the wings. 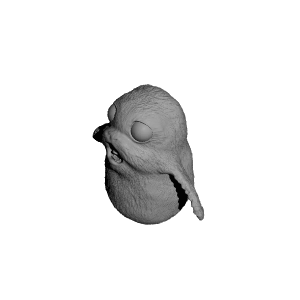 Made the screaming porg! I also designed acouple little feet to attach to his base :)

After weeks of waiting I *finally* printed out a Screaming Porg. Named him Steve. Hopefully print out another porg soon

I printed this little one at 40%. Very nice model.

Nice, just finished a quick paint this arvo. - thanks for the model.

Thanks for the model, I chopped it up in 3D builder to print full size, stands 30cm tall