Sculpture of a woman (the goddess Nike (Victoria))

3D
Scan The World
1,755 views 47 downloads
Community Prints Add your picture
Be the first to share a picture of this printed object
0 comments

Sculpture of a woman (the goddess Nike (Victoria))

This abstract sculpture depicts a woman figure with wings behind her back and her legs are turning to uncertain wavy shape. Possibly, the sculpture could be depicting the goddess Nike (Victoria).

Nike and her siblings were close companions of Zeus, the dominant deity of the Greek pantheon. According to classical (later) myth, Styx brought them to Zeus when the god was assembling allies for the Titanomachy against the older deities. Nike assumed the role of the divine charioteer, a role in which she often is portrayed in Classical Greek art. Nike flew around battlefields rewarding the victors with glory and fame, symbolized by a wreath of laurel leaves (bay leaves). Traditionally, Victoria is depicted winged. 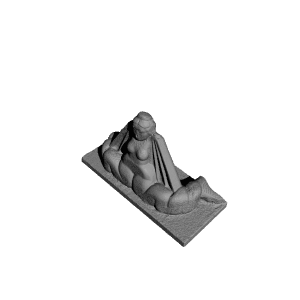