3D
Scan The World
3,032 views 62 downloads
Community Prints Add your picture
Be the first to share a picture of this printed object
0 comments

On the corner of College Street beside The 'Recollettenkerk' stands this bronze statue of the famous priest-poet and writer, Anton Van Wilderode (Pseudonym CyrilCoupe, 1918-1998). As a teacher at The Recollettenkerk he exerted an influence to numerous generations of intellectuals on a global scale. As a translator of Virgil, the poet, writer, lecturer and an assistant to the Iron Pilgrimage and the local school radio he became an outstanding personality in the Dutch region.

The sculptor, Wilfried Pas, depicts the poet sitting at a desk. His expression is whimsical but retains a sharp glance in the direction of the market. In his left hand he holds his inseparable cigar. Anton van Wilderode has a very distinctive presence, not as a heroic figure in Flemish literature but as an intelligent and sensitive man. Anton Van Wilderode died whilst this sculpture was being made; the artist met the writer once during his last year of his life so for further production of the representation he worked solely on photographs.

Wilfried Pas uses a distinctive style which was somewhat revolutionary in Belgium at the time. By making use of the silicone mold he could manage the control of form a lot easier. The resulting image appears to be a sketch in clay, so much so that one almost forgets that this lifelike portrait is actually cast in bronze. The figure rests on a kind of rough rock formation, emerging from it like a Rodin or Michelangelo. This rather classical performance or motif gets a surprisingly modern allure. The contract between raw and finishedleads to the work being very expressive and recognizable. 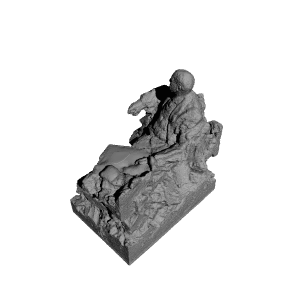 ×
0 collections where you can find Sculpture of Anton Van Wilderode in Sint-Niklaas, Belgium by Scan The World