Seated Amida, the Buddha of the Western Paradise at the Sainsbury Centre for Visual Arts, Norwich

3D
Scan The World
4,745 views 189 downloads
2 collections
Community Prints Add your picture
Be the first to share a picture of this printed object
0 comments

Seated Amida, the Buddha of the Western Paradise at the Sainsbury Centre for Visual Arts, Norwich

Amida, the Buddha of Infinite Light, is one of the most popularly worshipped deities in the Far East. According to sacred scripture, Amida created a paradise, known as the Pure Land (Jo do), where the souls of sentient beings could strive toward enlightenment without the pain and suffering associated with life on earth. In Japan, the worship of Amida became widespread during the Fujiwara period (894-1185), and high ranking aristocrats constructed temple buildings and commissioned paintings that represented Amida's glorious paradise.

The famous sculptor Jo_cho_ created an image of Amida (still remaining at Byo do-in temple in Uji, Japan) of unprecedented elegance and grace. With a round, youthful face, drowsy eyes and shallowly carved drapery, the sculpture conveyed meditative serenity and reassuring calm. The Institute’s Amida closely follows Jo_cho_’s prototype. Its surface, now damaged by fire, would have shimmered with a layer of gold. His hands are held in symbolic gestures (mudra): the raised right hand disperses fear and the lowered left hand is open in the gesture of giving or "wish granting." 12th Century. 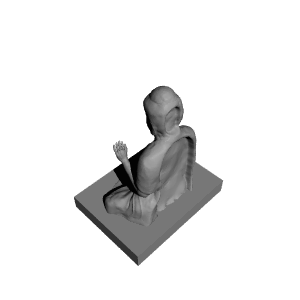 ×
2 collections where you can find Seated Amida, the Buddha of the Western Paradise at the Sainsbury Centre for Visual Arts, Norwich by Scan The World