3D
Scan The World
3,087 views 164 downloads
1 collection
Community Prints Add your picture
Be the first to share a picture of this printed object
0 comments

In Theravada Buddhism, an Arhat (Sanskrit: अर्हत् arhat; Pali: arahant; "one who is worthy") is a "perfected person" who has attained nirvana. In other Buddhist traditions the term has also been used for people far advanced along the path of Enlightenment, but who may not have reached full Buddhahood.

This term means "worthy" or "venerable," originally meant the disciples of the Buddha and by extension any guarantor and protector saint character of the Act. The number of 4, 16 and 500, excellence allows them access to the complete extinction soon after death. They are represented in the characters traits shaved head wearing the monastic habit and are considered models of the ascetic and contemplative life. 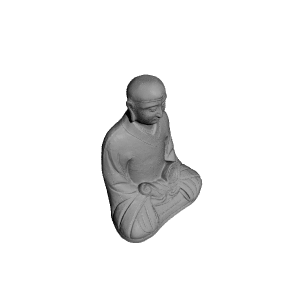 ×
1 collections where you can find Seated Arhat at The Guimet Museum, Paris by Scan The World