3D
Support Free Scan The World
3,224 views 150 downloads
1 collection
Community Prints Add your picture
Be the first to share a picture of this printed object
0 comments

Gautama Buddha, also known as Siddhārtha Gautama, Shakyamuni or simply the Buddha, was a sage on whose teachings Buddhism was founded.He lived and taught mostly in northeastern India sometime between the sixth and fourth centuries BCE. The word Buddha means "awakened one" or "the enlightened one". "Buddha" is also used as a title for the first awakened being in a Yuga era. In most Buddhist traditions, Siddhartha Gautama is regarded as the Supreme Buddha of the present age. Gautama taught a Middle Way between sensual indulgence and the severe asceticism found in the śramaṇa movement common in his region. He later taught throughout regions of eastern India such as Magadha and Kosala.

Siddhartha Gautama, who would one day become known as Buddha ("enlightened one" or "the awakened"), lived in Nepal during the 6th to 4th century B.C. While scholars agree that he did in fact live, the events of his life are still debated. According to the most widely known story of his life, after experimenting with different teachings for years, and finding none of them acceptable, Gautama spent a fateful night in deep meditation. During his meditation, all of the answers he had been seeking became clear, and achieved full awareness, thereby becoming Buddha. Gautama is the primary figure in Buddhism and accounts of his life, discourses, and monastic rules are believed by Buddhists to have been summarized after his death and memorized by his followers. Various collections of teachings attributed to him were passed down by oral tradition and first committed to writing about 400 years later.

Printed for PRINT3Dforum.com Just print it laying on the bed, no support necessary. 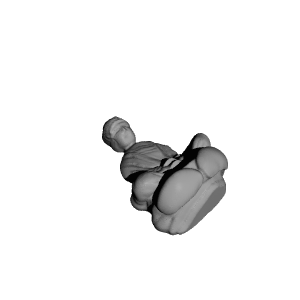 ×
1 collections where you can find Seated Lotus Buddha at The British Museum, London by Scan The World