3D
Scan The World
3,635 views 211 downloads
1 collection
Community Prints Add your picture
Be the first to share a picture of this printed object
0 comments

Chrysippus, a Stoic philosopher and scholar of the third century BC, is probably the draped old man depicted in this sculpture. According to Cicero, writing in the 1st century BC (On the Ends of Good and Evil, I, 39) and Sidonius Apollinaris, writing in the middle of the 5th century BC (Letters, IX, 14), an effigy statue of the philosopher was erected in Athens, in the district of Kerameikos (Ceramicus, the potters' quarter, from which the English word 'ceramic' is derived); the sculpture depicted him punctuating his speech by counting arguments on the fingers of his upturned hand. Pliny the Elder, in the 1st century AD (Natural History, XXXIV, 88) attributes the original to the Greek Sculptor Euboulides in the late 3rd century BC.

The feet and several folds around the right fore-arm, index-finger and thumb have been restored. 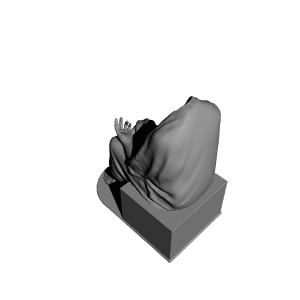 ×
1 collections where you can find Seated Philosopher: Chrysippus (?) at The Louvre, Paris by Scan The World