3D
Scan The World
2,115 views 107 downloads
Community Prints Add your picture
Be the first to share a picture of this printed object
0 comments

Olmec figurines depict people of all ages. They reflect a fascination with the human life-cycle, especially the transformation of a new-born child from a 'wild' state towards becoming fully adult.

The use of fine white kaolin clay imbues this figure with a plastic, life-like quality and traces of a vivid red pigment are still visible (on the original).

This article on the Olmec figurine describes a number ofarchetypical figurines produced by the Formative Period inhabitants of Mesoamerica. While many of these figurines may or may not have been produced directly by the people of the Olmec heartland, they bear the hallmarks and motifs of Olmec culture. While the extent of Olmec control over the areas beyond their heartland is not yet known, Formative Period figurines with Olmec motifs were widespread in the centuries from 1000 to 500 BCE, showing a consistency of style and subject throughout nearly all of Mesoamerica.

These figurines are usually found in household refuse, in ancient construction fill, and (outside the Olmec heartland) in graves, although many Olmec-style figurines, particularly those labelled as Las Bocas- or Xochipala-style, were recovered by looters and are therefore without provenance.

The vast majority of figurines are simple in design, often nude or with a minimum of clothing, and made of local terracotta. Most of these recoveries are mere fragments: a head, arm, torso, or a leg. It is thought, based on wooden busts recovered from the water-logged El Manati site, that figurines were also carved from wood, but, if so, none have survived.

More durable and better known by the general public are those figurines carved, usually with a degree of skill, from jade, serpentine, greenstone, basalt, and other minerals and stones. 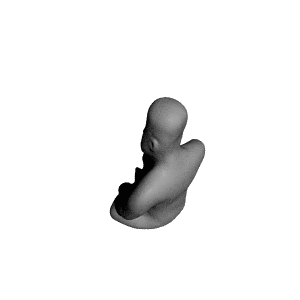 ×
0 collections where you can find Seated pottery figure at The British Museum, London by Scan The World