3D
Scan The World
1,946 views 131 downloads
Community Prints Add your picture
Be the first to share a picture of this printed object
0 comments

This colossus of Amenhotep III, whose distinctive facial features are still recognizable despite their damaged state, once adorned the temple he built to Amen-Re in Luxor (ancient Thebes). Like so many Dynasty 18 monuments, this statue, along with its partner (22.5.1), was usurped a century and a half later by Merneptah, who had it moved from its original location to the eastern portal of the temple. Merneptah's deeply incised titulary contrasts with the restrained carving of the sema tawy ("Unification of the Two Lands") motif on both sides of the throne of the other, larger colossus. While the broad, flat planes and bold proportions are typical of Egyptian architectural statuary, these two pieces are distinguished by the quality of their sculptural details, such as the rendering of the faces and the elements of the costumes. 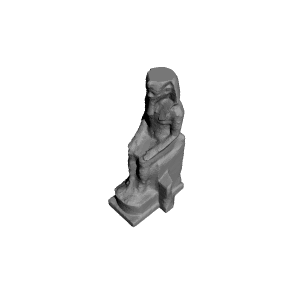