3D
Scan The World
4,529 views 261 downloads
1 collection
Community Prints Add your picture
Be the first to share a picture of this printed object
1 comments

In this statue Maya (Director of the Treasury) and his wife Meryt are portrayed as recipients of food offerings. They are dressed in their finest clothes, and the statue was clearly painted at one time. Unfortunately, the white of the clothes has now turned yellowish.

Maya was interior minister and finance of Tutankhamun and Horemheb, and also principal for these pharaohs. He founded a splendid tomb for himself and his wife Merit besides that of Horemheb in Saqqara. Three grave images of Maya and his wife since 1829 in Leiden. Their function was to accept substitute for the dead food offerings and to serve as a home for the Ka, the life principle of the deceased. The Maya group picture and Merit enables them in their finest clothes, waiting for food offerings. They wear gossamer linen robes. Maya holds a napkin. Individual Merit picture shows her with a menat, a musical instrument from the Amoncultus. Merit was a singer of Amun.

The excavation project, the Egypt Exploration Society and the National Museum of Antiquities carried out between 1975 and 1999 in Saqqara, and now continues with the University of Leiden by the museum, the heropsporing aims of the New Kingdom tombs in the early the 19th century was opened by collectors, but then disappeared under the sand. After the rediscovery and excavation of the tombs of Horemheb and Tia (the brother of Ramses II) in 1986 was also the tomb of Maya and Merit again to light.

Maya was one of the great men in Egypt Toetanchamonen Horemheb. Possibly he's already begun his career under the regime of Akhenaten. He was Director of the Treasury, a sort of Minister of the Interior and Finance simultaneously. Under him also attacked the construction and maintenance of large cemeteries, especially those of the Pharaohs in the Valley of the Kings. Under Tutankhamun Maya was part of the team of great men - led by Horemheb, then general - the strings were held. Maya organized the tomb structure and funeral of the young king and sealed his tomb again after it was accessed by thieves. The overwhelming grave treasure of the king he has two statues, described by his name and titles, contributed. Under his leadership, the general tomb of Horemheb was also made at Sakkara, and his pharaoh tomb in Thebes. He also performed as principal of the pharaoh construction of the temple of Amun at Karnak.

Maya had his own tomb built virtually next to that of General Horemheb. Under Ramses II was used the space lying between the two graves of the tomb complex of Schathuis Director Tia, the man of Ramses' sister. This couple had chosen this area because it had a special, sacred meaning. There are indications that Horemheb in his old general grave divine worship enjoyed and for Maya is a special cult known.

The superstructure of his grave has approximately the same format as that of Horemheb. Through a high gatehouse on the east side one enters a courtyard with three large indoor spaces, and then a second courtyard with three chapels.In the middle of the second garden is a ten meter deep shaft; through a labyrinth, a second shaft and a spiral staircase leads to, at nearly 22 meters, three with painted reliefs decorated rooms. It once lay the mummies of Maya and Merit and possibly those of other members of their family. The architecture of the entire tomb complex, in the applied reliefs, and loose objects which have survived some looting, all with an almost regal.

Royal character are primarily the impressive sculptures that have been in the first courtyard and into the imaging chamber into the superstructure of the tomb.Three of these images have been removed in the early years of the 19th century and ended up in the collection of Anastasy. They are the pieces in this collection, which was purchased in 1828 for the Museum of Antiquities. In 1843 the German Egyptologist Richard Lepsius has given the small courtyard of the tomb. Pictures of reliefs and a map published by him and he has some relief fragments taken to Berlin. A discovered by Lepsius, unfortunately damaged by Maya group picture and Merit was found by the British-Dutch team.

The three images in Leiden, two of which are shown here, all come from the same Memphite workshop. They are typical grave images, which functioned as food recipients in the sacrificial cult. They are actually cases of ka, life principle, the proposed persons. The group picture shows man and woman sitting on a chair with lion paws. They are waiting to speak when they are served with food and drink. Merit has tenderly her left arm placed around her husband.

Both are dressed in their finest costume: Merit in a long dress with a sort of shawl fijngeplisseerd, transparent linen and Maya in a thin shirt and a skirt with triangular apron of the same substance. By the shirt shine skin folds and denavelheen.According to the fashion of their time wearing a long wig with headband and the man beaten back flaps wide wig with partially over the shoulders. The Maya left hand holding a folded napkin. The space between the groteteenen the other toes of both figures is explained by the fact that it was customary to wear sandals that strap went through between the toes. The inscription on Maya's clothing includes a sacrificial prayer on behalf of dekavan the 'Director of the Treasury, Maya. The picture shows moreover see that once painted were the images of Maya and Merit. In the course of time is the white of the clothes, however, yellowish discolored.

Apart from this group picture of the couple, the museum holds a picture of each separately. That Maya is larger than life and shows him in the same position in the group picture. The image of Merit shows her in a high chair. Her feet resting on a footstool. Her wig is in itself a piece of art from fine hair braids. In the left hand she holds the attribute of its office of Amonpriesteres the menat. That is a musical instrument consisting of several strings of beads. It can as a pendant to be worn around the neck, but then, because of the weight, are held by means of a counterweight on the back in place. By striking the beads against the weight one could produce a ringing sound with the menat to accompany the temple hymns.The top of the article is decorated with the head of Hathor, the goddess of love and fertility. Vertically down the center of Merits garment is a strip of hieroglyphs.This text speaks her husband's wish that everything that comes from the altar of Osiriste forth, [also] may be intended for the Ka of his sister [ie his wife], his beloved and chosen one, Merit, the singer of Amun, where were voting. 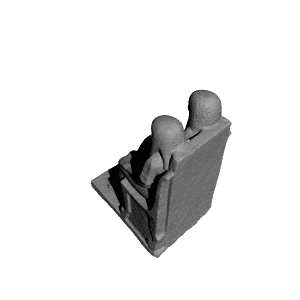