3D
360°
Featured Scan The World
2,191 views 215 downloads
3 collections
Community Prints Add your picture
Be the first to share a picture of this printed object
0 comments

The Demeter of Knidos is a life-size, seated ancient Greek statue that was discovered in the port of Knidos, south-west Asia Minor (present-day Turkey). Now part of the British Museum's collection, it is an impressive example of Hellenistic sculpture from around 350 BC.

The statue is made of marble and in its seated position is approximately 150 centimetres (4 ft 11 in) high. The goddess is seated on a throne and while parts of the sculpture are in excellent condition, the back and arm-rails of the throne, as well as her lower arms and hands, separately carved, are missing. The head was also carved independently from the body and fixed onto the neck. Demeter is depicted in a serene, timeless manner, that unveils her motherly role in the Greek pantheon of gods. 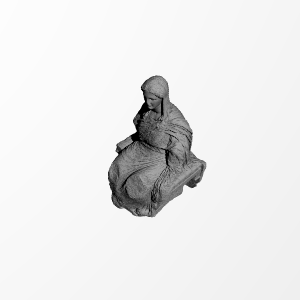 ×
3 collections where you can find Seated Woman, Demeter from Knidos by SMK - Statens Museum for Kunst