Self Portrait of Istvan Ferenczy

3D
Scan The World
1,557 views 46 downloads
Community Prints Add your picture
Be the first to share a picture of this printed object
0 comments

Self Portrait of Istvan Ferenczy

Ferenczy was born in Rimaszombat (today Rimavská Sobota in Slovakia). After being apprenticed to his father, a locksmith, he attended a course on copperplate engraving at the Vienna Academy where he was awarded for his medal "Solon".

After studying under Fischer and Kleiber at the Academy in 1817 where he learnt sculpture, in 1818 he walked to Rome and spent six years on a scholarship there where he worked in the workshop of Thorvaldsen, a Danish artist.

In 1819 he sent his first works ("Reposing Venus", "Portrait of Csokonai", "Shepherdess or the Beginning of Fine Crafts") to Hungary and they brought him several scholarships and, as a result, he became Canova's pupil for two years.

Inspired by his progressive artistic education, Ferenczy returned to Hungary in 1824. where by the 1830s he had modelled the portraits ("Ürmélyi", "Rudnay", "Kazinczy", etc.), tombs ("Kulcsár", "Szánthó", "Fornay", ), and altarpieces ("The Blessed" in Vál, "The Martyrdom of St. Stephen" in Esztergom,) and some smaller memorials ("Károly Kisfalady" in Muzeumkert, Budapest).

It was Ferenczy who discovered marble in Ruszicka. Travels and excavations cost his much of his fortune. He completed the "Statue of Kölcsey", his major work in 1846 but retired from larger sculpture work from 1847 onwards. Only the statue of "Eurydike", one of his best works, and small clay statuettes occupied in his time in the 1850s.

Ferenczy made a number of exerted attempts to establish a school of sculpture in Hungary and it was his mission to establish and promote national art in Hungary. However, he proved to be unsuccessful in setting up a sculptural school, but many of his works remain in the Hungarian National Gallery as a symbol of Hungarian art during the first half of the nineteenth century. 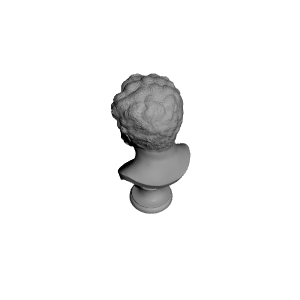