Self Portrait of Jean-Baptiste Pigalle at The Louvre, Paris

3D
Scan The World
3,402 views 121 downloads
1 collection
Community Prints Add your picture
Be the first to share a picture of this printed object
0 comments

Self Portrait of Jean-Baptiste Pigalle at The Louvre, Paris

Jean-Baptiste Pigalle (26 January 1714 – 20 August 1785) was a Frenchsculptor. Pigalle was born in Paris, the seventh child of a carpenter. Although he failed to obtain the Prix de Rome, after a severe struggle he entered the Académie Royale and became one of the most popular sculptors of his day. His earlier work, such as Child with Cage (model at Sèvres) and Mercury Fastening his Sandals (Berlin, and lead cast in Louvre), is less commonplace than that of his more mature years, but his nude statue of Voltaire, dated 1776 (initially in theInstitut de France, purchased by the Louvre in 1962), and his tombs of Comte d'Harcourt (c. 1764) (Notre Dame de Paris) and of Marshal Saxe, completed in 1777 (Saint-Thomas Lutheran church, Strasbourg), are good examples of French sculpture in the 18th century. Pigalle taught the sculptor Louis-Philippe Mouchy, who married his niece, and who closely copied Pigalle's style. His name is most commonly known today because of the Pigalle red-light district in Paris, located around the square of the same name. Pigalle died in Paris on 20 August 1785.

Printed by PRINT3Dforum.com Printing Services - Support required. Other than that, pretty straightforward print. You may have to use raft if you use cold bed. 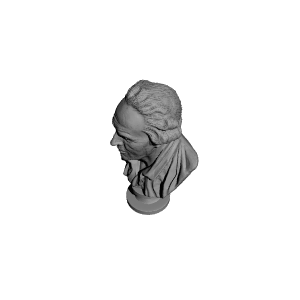 ×
1 collections where you can find Self Portrait of Jean-Baptiste Pigalle at The Louvre, Paris by Scan The World