3D
Scan The World
2,260 views 103 downloads
Community Prints Add your picture
Be the first to share a picture of this printed object
0 comments

Septarian nodules are a type of concretion with cracks that become filled with minerals, in this case, calcite.

In sedimentology and geology, a nodule is small, irregularly rounded knot, mass, or lump of a mineral or mineral aggregate that typically has a contrasting composition, such as a pyrite nodule in coal, a chert nodule in limestone, or a phosphorite nodule in marine shale, from the enclosing sediment or sedimentary rock. Normally, a nodule has a warty or knobby surface and exists as a discrete mass within the host strata. In general, they lack any internal structure except for the preserved remnants of original bedding or fossils. Nodules are closely related to concretions and sometimes these terms are used interchangeably. Minerals that typically form nodules include calcite, chert, apatite (phosphorite), anhydrite, and pyrite 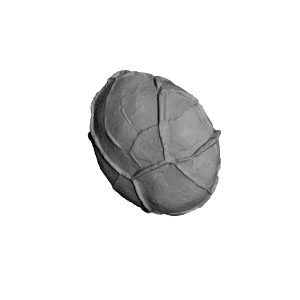 ×
0 collections where you can find Septarian nodule by fossilsinshropshire