3D
Scan The World
3,427 views 96 downloads
Community Prints Add your picture
Be the first to share a picture of this printed object
0 comments

The god Serapis derived from an Egyptian hybrid god, a combination of two separate deities: Osiris, god of the Afterlife, and the Apis bull. In the Roman period, the worship of Serapis was widespread. Numerous images of the god are known, from busts to full-length, life-sized figures. This better preserved figure is seated on a throne and rests one hand on the head of Cerberus, the triple-headed hound who guarded the Underworld in Greek and Roman mythology. The object on Serapis' head is a modius, a receptable for measuring grain. These features, along with the locks of hair on his forehead, and the division of his beard into two strands at the front, are typical or Roman-period images of the god. 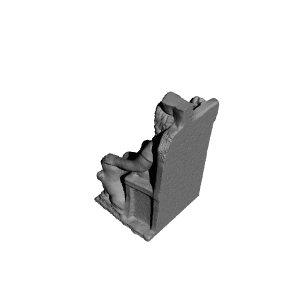 ×
0 collections where you can find Serapis Figure (Right) at The Fitzwilliam Museum, Cambridge by sylvainpreumont