3D
Scan The World
3,122 views 249 downloads
6 collections
Community Prints Add your picture
Be the first to share a picture of this printed object
0 comments

Sergei Pavlovich Korolev (Russian: Серге́й Па́влович Королёв; IPA: [sʲɪrˈgʲej ˈpavləvʲɪtɕ kərɐˈlʲɵf] , Ukrainian: Сергі́й Па́влович Корольoв, Serhiy Pavlovych Korolyov), also transliterated as Sergey Pavlovich Korolyov; 12 January [O.S. 30 December 1906] 1907 – 14 January 1966) worked as the lead Soviet rocket engineer and spacecraft designer during the Space Race between the United States and the Soviet Union in the 1950s and 1960s. He is considered by many as the father of practical astronautics.

Although Korolev trained as an aircraft designer, his greatest strengths proved to be in design integration, organization and strategic planning. Arrested for alleged mismanagement of funds (he spent the money on unsuccessful experiments with rocket devices), he was imprisoned in 1938 for almost six years, including some months in a Kolyma labour camp. Following his release he became a recognized rocket designer and a key figure in the development of the Soviet Intercontinental ballistic missile program. He was then appointed[by whom?] to lead the Soviet space program and made a Member of Soviet Academy of Sciences, overseeing the early successes of the Sputnik and Vostok projects including the first human Earth orbit mission by Yuri Alexeevich Gagarin on 12 April 1961. Korolev's unexpected death in 1966 interrupted implementation of his plans for a Soviet manned Moon landing before the United States 1969 mission.

Before his death he was officially identified only as Glavny Konstruktor (Главный Конструктор), or the Chief Designer, to protect him from possible cold war assassination attempts by the United States. Only following his death in 1966 has he received appropriate public recognition as the driving force behind Soviet accomplishments in space exploration during and following the International Geophysical Year. 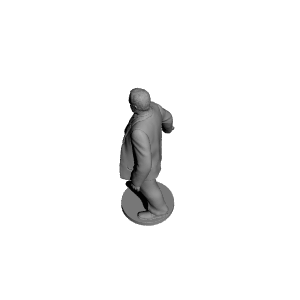