3D
360°
Featured Scan The World
3,189 views 525 downloads
7 collections
Community Prints Add your picture
Be the first to share a picture of this printed object
1 comments

Seti II (or Sethos II) was the fifth pharaoh of the Nineteenth Dynasty of Egypt and reigned from c. 1203 BC to 1197 BC. His throne name, Userkheperure Setepenre, means "Powerful are the manifestations of Re, the chosen one of Re".

This plaster cast relates to the quartzite sculpture of Pharaoh Seti II, c.1200-1194 BC, housed at The British Museum (Department of Ancient Egypt and Sudan, inv. no. EA.26). The original sandstone is considered one of the most complete sculptures from Ancient Egypt.

The Danish sculptor Bertel Thorvaldsen was recognized in all of Europe as one of the leading artists of the time. He lived in Rome from 1797-1838, where he built a comprehensive collection of plaster casts, mainly after antique or Egyptian sculpture. 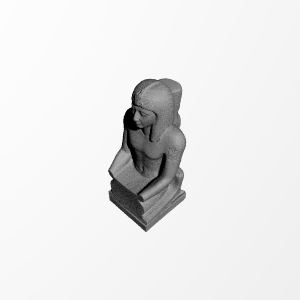