3D
Scan The World
3,998 views 108 downloads
3 collections
Community Prints Add your picture
Be the first to share a picture of this printed object
0 comments

Sandstone cross-shaft; carved in high relief on main face with an archer kneeling at foot of vine-scroll. Stylized vine-scroll decoration on two sides. There is a trough in the back.

Decorated free-standing stone crosses played an important part in the Anglo-Saxon Christian church. The iconographic scheme of this example, which has suffered some damage including the loss of its cross-head, is typical of the period. Two sides carry stylized vine scroll decoration which, in Late Antique and Early Medieval Christian tradition, symbolized Christ as the 'True Vine' (Saint John's Gospel 15: 1-7). The main surviving face also bears a vine, its branches drooping with heavy fruit, and in which an archer is concealed as he stalks his quarry. Like other similar representations in Anglo-Saxon art, he is probably intended as an image of the Divine Word, seeking its target. Hunting by archery was important in Anglo-Saxon culture, both as an aristocratic sport and as a source of food.
In the sixteenth century the cross shaft was removed from the parish church (now Sheffield Cathedral) where it had stood, and hollowed out on one side to serve as a horse trough. 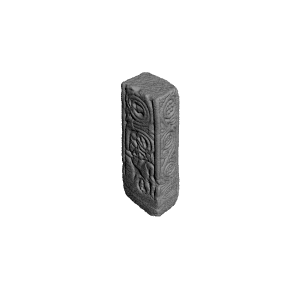