3D
Scan The World
6,217 views 232 downloads
2 collections
Community Prints Add your picture
Be the first to share a picture of this printed object
0 comments

Lining the fences of the Sheldonian in Oxford are a series of 13 square pillars toppted by head-and-shoulder busts marking its front boundary. The official name for such heads is “herms”; the original accounts describe these heads as “termains”; and some people call them philosophers. But Max Beerbohm in Zuleika Dobson called them “Emperors”, and that is the name that has stuck. Each head shows a different type of beard.

The present heads are the third set. The first set lasted 200 years, but by 1868 they were crumbling and new ones were erected; undergraduates, however, daubed these in paint, and the harsh cleaning they received caused them to wear badly, so that they could be described by John Betjeman (in his verse autobiography Summoned by Bells) as “the mouldering busts round the Sheldonian” when he came up in 1925. 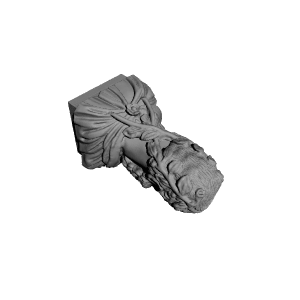 ×
2 collections where you can find Sheldonian Bust in Oxford, UK by Scan The World