3D
Scan The World
2,393 views 176 downloads
2 collections
Community Prints Add your picture
Be the first to share a picture of this printed object
0 comments

"She was found in Shepperton, on the Western fringes of London, dug into the gravel in the remains of an ancient sacred site. Give or take, she’s around 5,500-years-old – Neolithic. We’ve got earlier bodies and human remains, but nothing quite as complete.

That’s down to sheer dumb luck, I think. The soil preservation was good enough for the bones to survive, which was a huge factor in the way we’ve chosen to display her.

It was only when the pathology came in that we saw exactly how we were going to do it - it was an absolute no-brainer. ‘Shepperton Woman’ is the oldest Londoner whose face we could realistically reconstruct.

Caroline Wilkinson - the dental pathologist we got in - does a lot of work for the police on murder and burns victims. Seven or eight out of 10 people recognise their relatives from her reconstructions, so it’s theoretically quite possible that someone who knew this woman would recognise her from the model.

There are certain caveats, of course. We’ve no idea of the colour of her hair or eyes, or the nature of her skin pigmentation. But the architecture of the face – the cheekbones, chin, even the earlobes - could be reconstructed with reasonable accuracy. We used a bit of artistic license on the hairstyle, of course.

It’s an interesting face – she has been described as 'masculine', and Caroline did come back to us several times while she was performing the reconstruction to ask if we were absolutely sure the body was a woman’s. I told her I only had what the bone specialists told us to go on, and that they were fairly confident.

Shepperton Woman would have been between 30 and 40 years old when she died – not a bad age in stone-age society. We do get older people, but about four or five out of every 10 people in those days didn’t survive beyond a year.

She was one of the lucky ones, and the fact she lived as long as she did is a testament to her lifestyle.

Her teeth are worn flat – she’d obviously eaten a lot of gritty, stone-ground bread. All the same, they’re probably in better nick than those of most people today.

She’d have had no processed sugar in her diet, and plenty of whole grains and roughage. She lost one or two teeth, but there’s no evidence of any dental decay.

What’s more, the amount of lead in her teeth tells us she couldn’t have been drinking local groundwater when she was a child because there isn’t lead-rich groundwater in the London area.

She must have come from a chalkier, more calcareous area, somewhere like the Pennines, the Mendips or the Derbyshire Peaks – a long way to the north, in other words.

We don’t know why she ended up where she did – whether she came down of her own accord or was brought down as a bride of even a slave we have no idea.

It may be that because she was an incomer, an outsider to the local community, she was given special dispensation at death to be buried in this sacred place in the landscape.

She was certainly buried in a very deliberate way in the ditch bottom. There was another burial a few metres away from her, probably a male, but he wasn’t nearly as complete. A lot of the locals, I suspect, probably went into the Thames, but she was for some reason regarded as special.

We may never know why, but these little mysteries are all part of the beauty of archaeology – it’s fascinating to piece together what we can from the clues we have." 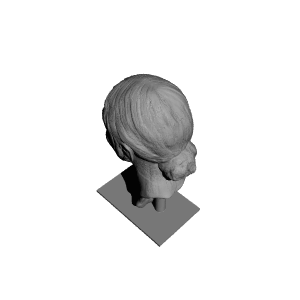