3D
Scan The World
2,207 views 145 downloads
1 collection Add to collection
6 0
Community Prints Add your picture
Be the first to share a picture of this printed object
0 comments

Shiva (/ˈʃivə/; Sanskrit: Śiva, lit. the auspicious one) is one of the principal deities of Hinduism. He is the supreme God within Shaivism, one of the three most influential denominations in contemporary Hinduism.

Shiva is "the transformer" within the Trimurti, the Hindu trinity that includes Brahma and Vishnu. In Shaivism tradition, Shiva is the Supreme being who creates, protects and transforms the universe. In the goddess tradition of Hinduism called Shaktism, the goddess is described as supreme, yet Shiva is revered along with Vishnu and Brahma. A goddess is stated to be the energy and creative power (Shakti) of each, with Parvati the equal complementary partner of Shiva. He is one of the five equivalent deities in Panchayatana puja of the Smarta tradition of Hinduism.

At the highest level, Shiva is regarded as formless, limitless, transcendent and unchanging absolute Brahman, and the primal Atman (soul, self) of the universe. Shiva has many benevolent and fearsome depictions. In benevolent aspects, he is depicted as an omniscient Yogi who lives an ascetic life on Mount Kailash as well as a householder with wife Parvati and his two children, Ganesha and Kartikeya. In his fierce aspects, he is often depicted slaying demons. Shiva is also known as Adiyogi Shiva regarded as the patron god of yoga, meditation and arts.

The main iconographical attributes of Shiva are the third eye on his forehead, the serpent around his neck, the adorning crescent moon, the holy river Ganga flowing from his matted hair, the trishula as his weapon and the damaru. Shiva is usually worshiped in the aniconic form of Lingam. Shiva is a pan-Hindu deity, revered widely across India, Nepal and Sri Lanka. 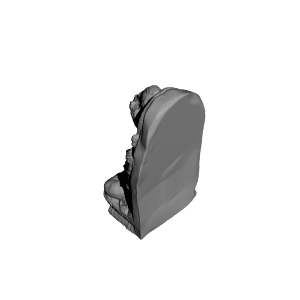 ×
1 collections where you can find Shiva by Scan The World