3D
Scan The World
3,390 views 253 downloads
2 collections
Community Prints Add your picture
Be the first to share a picture of this printed object
0 comments

According to the legend, Silenus was ordered by Zeus to carry Dionysos, his illegitimate son, to protect the child from the wrath of Hera. The statue, whose subject is known by other ancient copies, might have been a replica of a bronze work, now lost, created by the Greek sculptor Lysippos in the fourth century BC. This can be identified by seeing some characteristic features of the artist, such as the slenderness and unstable balance of the body or odd use of negative space.

Pliny the Elder mentioned a satyr by Lysippos in the first century AD in Athens (Natural History XXXIV, 64).

The base has been reworked in modern times. The statue is a complex assembly of original parts with additional parts added, executed in marble and plaster. 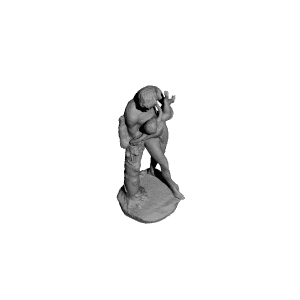 ×
2 collections where you can find Silenus holding Bacchus at The Louvre, Paris by Scan The World