3D
Scan The World
2,555 views 141 downloads
1 collection
Community Prints Add your picture
Be the first to share a picture of this printed object
0 comments

This is one of many copies of an original sculpture of the late 4th century BC from the school of Lysippos. The most popular, well-refined copy can be found at The Louvre, made for the Borghese collection (Ma 922, MR 346, available on MyMiniFactory).

The age Silenus, tutor and companion of the god of wine Dionysus, cradles the god who is here shown as a baby. The figure was first identified as a faun. One early critic, however, preferred to see him as Saturn about to devour one of his children. It is a sculpture that celebrated than it is today. It was praised greatly by writers and aesthetes in the seventeenth and eighteenth centuries and was frequently reproduced in France, Italy and the UK. Its ownership changed a number of times between 1569 when it is first recorded, and 1807 when Napoleon acquired it for France. The original has been extensively restored in grey-veined marble and plaster. 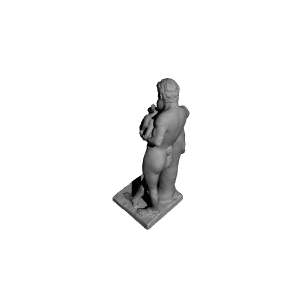 ×
1 collections where you can find Silenus Holding the Infant Dionysus at The State Hermitage Museum, St Petersburg by Scan The World