3D
Scan The World
3,628 views 308 downloads
Community Prints Add your picture
Be the first to share a picture of this printed object
0 comments

Bolívar was born into a wealthy, aristocratic Creole family, and similar to others of his day, he was educated in Europe at a young age, arriving in Spain at the age of 16. There, he was introduced to the thoughts and ideas of learned Enlightenment philosophers, which inspired him with the ambition to liberate his native Venezuela from Spanish rule. Taking advantage of the disorder in Spain prompted by the Peninsular War, Bolívar inaugurated his campaign for independence in 1808, and within three years an organized national congress had been established. Despite a number of hindrances, including the arrival of an unprecedentedly large Spanish expeditionary force, the revolutionaries eventually prevailed, culminating in a patriot victory at the Battle of Carabobo in 1821, which effectively freed Venezuela.

Following this triumph over the Spanish monarchy, Bolívar participated in the foundation of the first union of independent nations in Latin America, Gran Colombia, of which he was president from 1819 to 1830. Through further military conquest, he also liberated Ecuador, Peru, and finally, Bolivia (which was named after him), assuming the presidency of each of these new nations. At the peak of his power, Bolívar held near-absolute power over a vast territory from the Argentine border to the Caribbean.

Modern-day historians consider Bolívar to be a deeply polarizing individual, with criticism aimed especially at his belief that a strong presidency, maintained for life, is essential to a state's survival. Nevertheless, most Latin Americans laud him as a meritorious liberator, whose revolutionary ideas and reforms continue to leave a lasting legacy today. 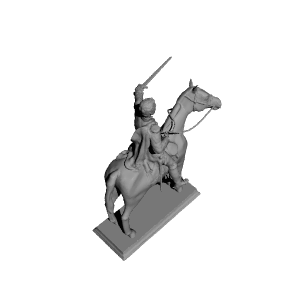 ×
0 collections where you can find Simon Bolivar at The Jardin des Tuileries, Paris by Scan The World