This is my first design ever. After having a quick look at the 3d printing nerd design spool holder challenge I thought I should give it a crack and see what I could do.

After spending the weekend playing around with fusion 360 for the first time ever I finally came up with a design I liked.

The design is quite simple. The spool holder only needs to hold 1kg and connect onto the existing shelfing that has a width of appox 18mm. Force wise this is bugger all so I opted to use a push on design hence you just slip it over the 18mm bit of shelving and push it on.

From my prototypes (which were longer in the brace section as I only had a 35mm bit of wood floating about) it easily  supported all the spools I had lying around. The cantilever spool holder section is 100mm long.

I Printed on my Prusa I3 Mk3 from some left over abs. This version is optimised quite well for printing taking roughly an hour. Print with 15% infill. No support material is needed. Due to my inexperiance with fusion 360 the item will open up vertically in the slicer, rotate 90 degrees to get the flat long edge on the printbed.

The only limitation with the design is that if the shelving has a curved edge around the top rather then a square edge you won't get the contact area to properly support it and it will slip off.

15% infill. Make sure the flat edge is on the print bed in your slicer program. 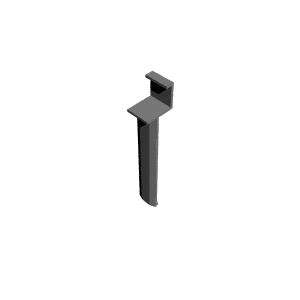