3D
Scan The World
2,032 views 112 downloads
Community Prints Add your picture
Be the first to share a picture of this printed object
0 comments

A son of the manse, Sir David Wilkie (1785-1841) spent the first few years of his career painting portraits of the local gentry and recording village life in his native Fife. He moved to London in 1805 and quickly established himself as one of the most brilliant and innovative artists in Regency Britain. Wilkie's works were enormously popular. Telling their story through expression, gesture and detail, they had a considerable influence on the development of Victorian genre painting.

Joseph's posthumous bust shows the artist as a young man; the slightly parted lips and distant gaze giving the portrait an idealised quality. Joseph lived in Edinburgh between 1821 and 1829. He was a founder member of the Royal Scottish Academy; some of the RSA's earliest meetings were held in Joseph's Edinburgh studio in Windsor Street. 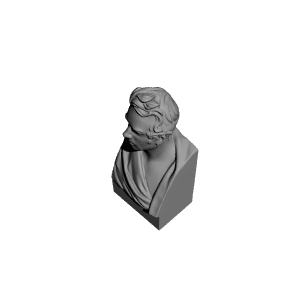