3D
Scan The World
2,429 views 57 downloads
Community Prints Add your picture
Be the first to share a picture of this printed object
0 comments

One of the most caricatured British politicians of the time, Burdett became an icon of social and political radicalism and a leading promoter of the 1832 Reform Bill extending the electorial franchise. The patronage of Burdett, a national figure, was a coup for Ternouth. A former assistant of Sir Francis Chantrey. Ternouth was then building a reputation as an independent sculptor. When displayed at Rossie Priory, this bust served as a symbol of the Kinnaird family's own political liberalism. 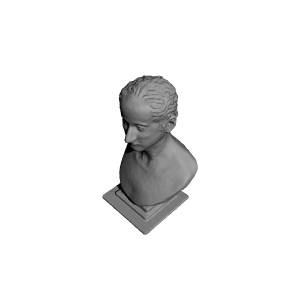 ×
0 collections where you can find Sir Francis Burdett at The Scottish National Gallery, Scotland by Scan The World