3D
Featured
2,426 views 105 downloads
Community Prints Add your picture
Be the first to share a picture of this printed object
0 comments

The bust shows Sir Henry Havelock (1795-1857). In 1857-8 there was an uprising in India against the British East India Company, which functioned as a sovereign power on behalf of the British Crown. The uprising is known by many names, including India's First War of Independence and the Sepoy Mutiny. Havelock's forces were responsible for torching towns in response to the uprising, resulting in the mass killing of urban populations. Captured rebel Sepoys were executed by being 'blown from a gun' - the victim was tied to the mouth of a cannon, scattering their remains and thus making burial difficult. 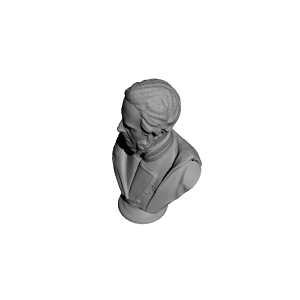 ×
0 collections where you can find Sir Henry Havelock by FitzwilliamMuseum