3D
Scan The World
1,661 views 85 downloads
Community Prints Add your picture
Be the first to share a picture of this printed object
0 comments

Sir Henry Raeburn (1756-1823) was the most successful Scottish portrait painter of the late eighteenth and early nineteenth centuries. As with his predecessor, Allan Ramsay, Italy played a vital role in his artistic development. While little is known of the nearly two years he spent there, he clearly immersed himself in study. He was close to Rome's leading antiquarian, James Byres, and painted a sensitive portrait of Byres's nephew and assistant, Patrick Moir. Still more significantly, after his return to Edinburgh Raeburn immediately began the period of intense experimentation that was to be the basis of his mature artistic style.

Thomas Campbell's bust, although based on a plaster model made in Edinburgh, was carved in Rome in a style that evokes the refined simplicity of ancient Greek and Roman sculpture. 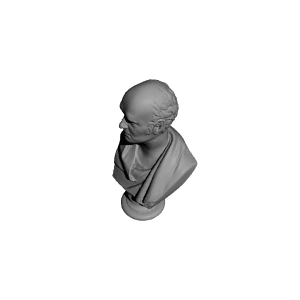