3D
Scan The World
2,922 views 125 downloads
1 collection
Community Prints Add your picture
Be the first to share a picture of this printed object
0 comments

This bust of Tate commemorated the opening of the original Tate Gallery. Sir Henry Tate (1819-1899) had made his fortune through a new process of sugar refining and by selling sugar in neat, white cubes. In 1889 he offered to donate a collection of contemporary British art to the National Gallery. Since no suitable space could be found for these works, Tate provided the funds to build an entirely new gallery at Millbank, which opened in 1897. Brock was a successful portrait sculptor of the Victorian era, whose crowning achievement was the Queen Victoria Memorial in front of Buckingham Palace 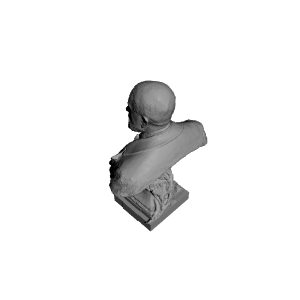 ×
1 collections where you can find Sir Henry Tate in Brixton, London by Scan The World