3D
360°
Scan The World
1,099 views 54 downloads
Community Prints Add your picture
Be the first to share a picture of this printed object
0 comments

Sir Jacob Epstein (1880-1959) was the leading modernist sculptor of his day. Born in New York to Polish-Jewish parents, he studied in Paris before moving to London in 1905 and quickly gaining reputation as a brilliant, if controversial, sculptor. The eirhgteen nude figures he created for London's british Medical Association building (1908) shocked Edwardian sensibilities. However, Rock Drill (1913-5) epitomises Vorticist style and is among Epstein's most celebrated works. His later portrait sculpture cemented his reputation and he was knighted in 1954.

This bronze self-portrait is from circa 1912. 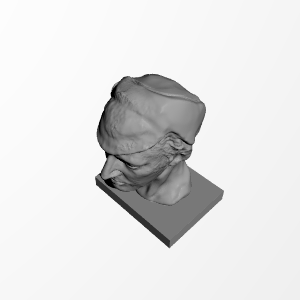