3D
Scan The World
2,035 views 142 downloads
Community Prints Add your picture
Be the first to share a picture of this printed object
0 comments

At the end of his life, bankrupt and ill, Sir Walter Scott (1771-1832) travelled to mainland Europe to recuperate. When in Rome in 1832, Scott met the great neoclassical sculptor Bertel Thorvaldsen, a hero in his native Denmark. He carved portraits of some of the most important figures of his day. Despite Scott's failing health, Thorvaldsen imbued his sculpture with a sense of stoic heroism, capturing the author's recognisable facial features in this otherwise idealised portrait. The bust was only completed in 1834, two years after Scott's death.

Polio left Scott permanently lame in the right leg at the age of eighteen months. His parents sent him to recover at his grandfather's farm near Kelso in the Borders. Here he came to know and love the ballads which later inspired his literary career . Scott's novels were read and admired throughout Europe. Those which have Scottish themes, like Old Mortality and Heart of Midlothian, have had a major impact on how Scots view their own past. After retiring in 1830, his health ruined through overwork, Scott travelled to Italy. Here he met the Danish neo-classical sculptor, Thorvaldsen. The bust which resulted from their meeting presents the writer as a noble genius rather than as an exhausted old man.. 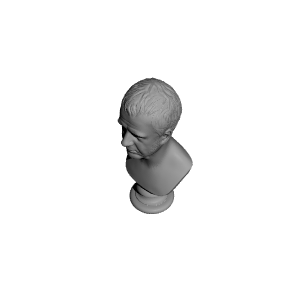