3D
Scan The World
3,558 views 108 downloads
Community Prints Add your picture
Be the first to share a picture of this printed object
0 comments

Sir Walter Scott was the 1st Baronet who lived 1771-1832. Chantrey's admiration for the famous poet and novelist led him to 'ask him to sit for me... the only time I ever recollect having asked a similar favour of any one'. The original bust was executed in 1820 and given to Scott in 1828 as 'a token of esteem'. Contemporaries considered it a fine, good-humoured likeness and Scott was particularly impressed by Chantrey's use of modern details- like the tartan cape- which updated classical tradition without overstepping the timeless requirements of a portrait in marble. This copy was sculpted out of marble (dated 1841) by an unknown artist after Sir Francis Leggatt Chantrey (1781-1841). 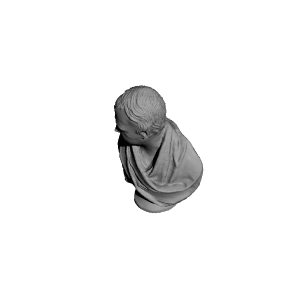 ×
0 collections where you can find Sir Walter Scott at The National Portrait Gallery, London by Scan The World