3D
Scan The World
3,001 views 215 downloads
2 collections
Community Prints Add your picture
Be the first to share a picture of this printed object
0 comments

Avalokiteśvara "Lord who looks down", is a bodhisattva who embodies the compassion of all Buddhas. This bodhisattva is variably depicted and described and is portrayed in different cultures as either female or male. In Chinese Buddhism, Avalokiteśvara has become the somewhat different female figure Guanyin. In Cambodia, he appears as Lokeśvara. He is sitting in the Simhasana position, or Lion Pose. It is an asana. The asana resembles a seated lion, hence the name Simha (lion in Sanskrit) asana. The practitioner's facial expressions are modified to resemble a lion. The Lion Face Gesture (Simha Mudra) is performed with other sitting asanas such as Padmāsana (Lotus Pose), or standing with the palms on the waist and the feet 6-12 inches apart. 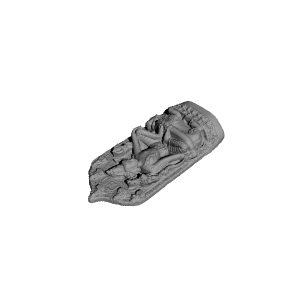