Siva at The Guimet Museum, Paris

3D
Scan The World
3,532 views 309 downloads
Community Prints Add your picture
Be the first to share a picture of this printed object
0 comments

Siva at The Guimet Museum, Paris

This granite head was found Cambodia, the provenance is not exact. It was made circa the XII Century in the Bayon Style (1180-1230); this is the period where buddhist art was at its height and Buddhist themes prevail, though Hindu legends are still represented. This style is monumental, aesthetics shows a clear return to realism. Shiva ("The Auspicious One"), also known as Mahadeva ("Great God"), is one of the main deities of Hinduism. He is the supreme god within Shaivism, one of the three most influential denominations in contemporary Hinduism. He is one of the five primary forms of God in the Smarta tradition, and "the Destroyer" or "the Transformer" among the Trimurti, the Hindu Trinity of the primary aspects of the divine.

At the highest level, Shiva is regarded limitless, transcendent, unchanging and formless. Shiva also has many benevolent and fearsome forms. In benevolent aspects, he is depicted as an omniscient Yogi who lives an ascetic life on Mount Kailash, as well as a householder with wife Parvati and his two children, Ganesha andKartikeya and in fierce aspects, he is often depicted slaying demons. Shiva is also regarded as the patron god of yoga and arts.

The main iconographical attributes of Shiva are the third eye on his forehead, the snake Vasuki around his neck, the crescent moonadorning, the holy river Ganga flowing from his matted hair, the trishulaas his weapon and the damaru as his musical instrument. Shiva is usually worshiped in the aniconic form of Lingam. 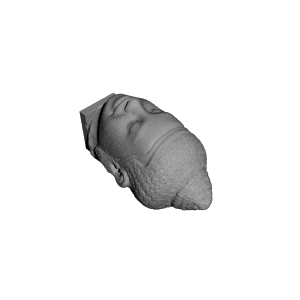 ×
0 collections where you can find Siva at The Guimet Museum, Paris by Scan The World